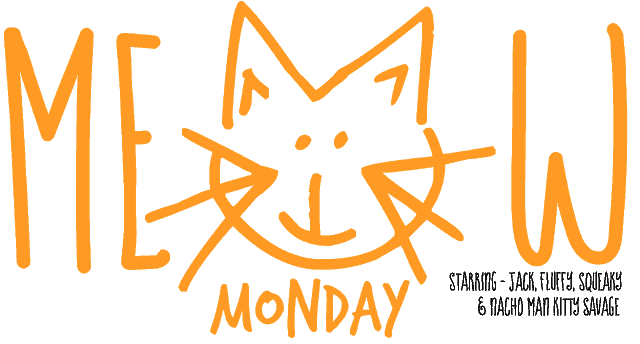 Meow Monday – pictures of cute cats to start off your week! 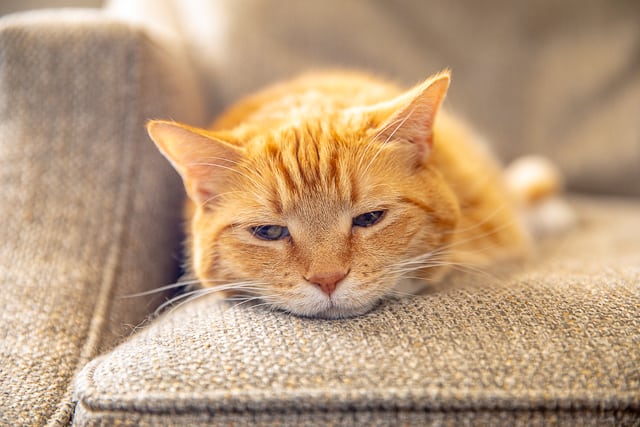 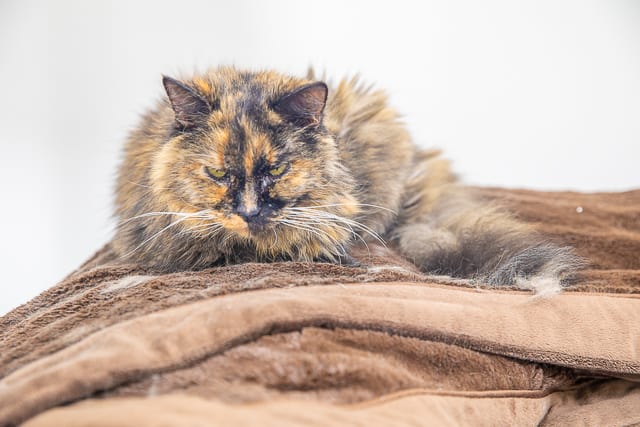 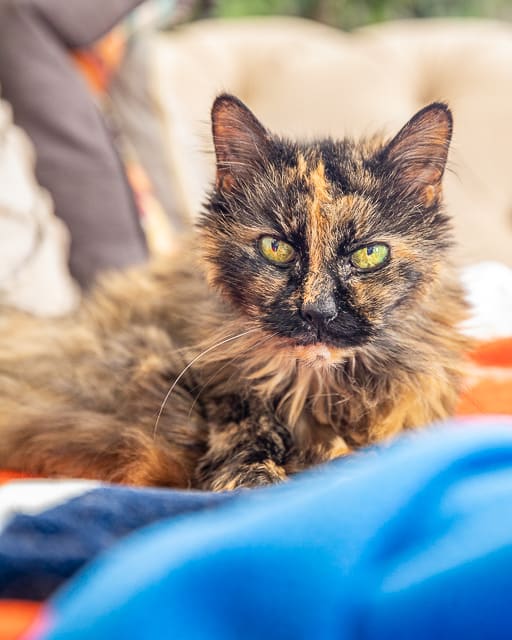 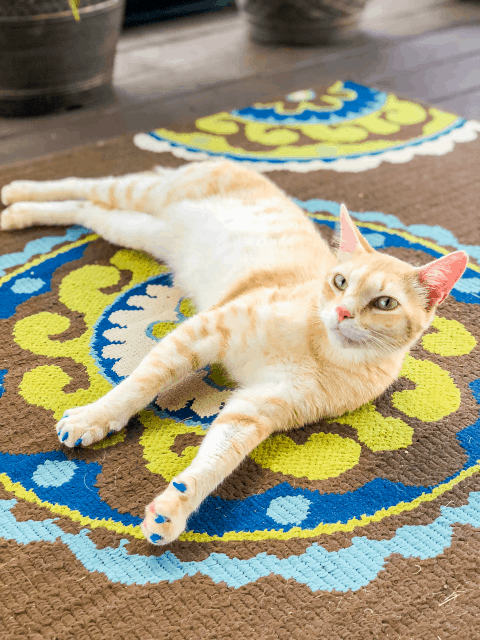 We got adopted!! AGAIN!!

Chicken Legs has been seeing this orange cat in our backyard for a while. He was living in the bushes  behind our house and in one of the gutters on our street. He really liked hanging around the bird feeder. The other day, he jumped up and snagged a bird right off the feeder and went trotting into the woods. It was an impressive kill. I hated it for the bird though!

A few weeks ago, Chicken Legs fed the cat. The cat gobbled up two cans of food in no time flat. I knew right then, Chicken Legs had a new cat. LOL!

Last Tuesday, Chicken Legs went out to water the plants and the cat came out of the woods meowing at Chicken Legs. Chicken Legs grabbed some food and decided right them to bring the cat inside. We took the cat to the vet. He got some shots and some pretty blue nail caps. He left the vet with a clean bill of health, so we brought him inside.

Nacho Man Kitty Savage stayed locked up in the guest room the first full day he was here. He was DYING to get out, so we opened the door and have been letting him explore the house at his own pace.

How are the other cats handling Nacho Man Kitty Savage?

Fluffy is so old that I don’t think she even knows that he is here. Nacho Man will hiss at her and she honestly can’t even hear him. Nacho Man has given up on Fluff at this point. He can tell she isn’t a threat.

Squeaky is the sweetest cat. She is just trying to mind her own business. Nacho Man will see her and hiss. Squeaky just looks at him and walks away. She is just sticking to her normal routine.

Jack. Oh, Jack. Jack LOVES cats. Jack is DYING to be Nacho Man’s friend. Nacho Man isn’t ready to be best buds with Jack yet. They hiss at each other and then stop and just look at each other for a while. Jack likes to sneak up on him and sniff his tail. Nacho Man doesn’t like it! LOL!
I have no doubt they will be best friends in a few weeks. OR at least Nacho Man will tolerate Jack.
Don’t worry, Jack is still the KING of the house!!

Nacho Man is making himself at home. He LOVES head and belly rubs. He is a real cuddle bug.

Nacho Man is A LOT younger than all of our other cats. He is FULL of energy.
It’s been a big adjustment for Chicken Legs and me.
We are used to our old cats sleeping all day. Nacho Man is bouncing off the walls all day!
We are excited to welcome Nacho Man Kitty Savage to the family!
We are very happy that he is safe and sound inside! 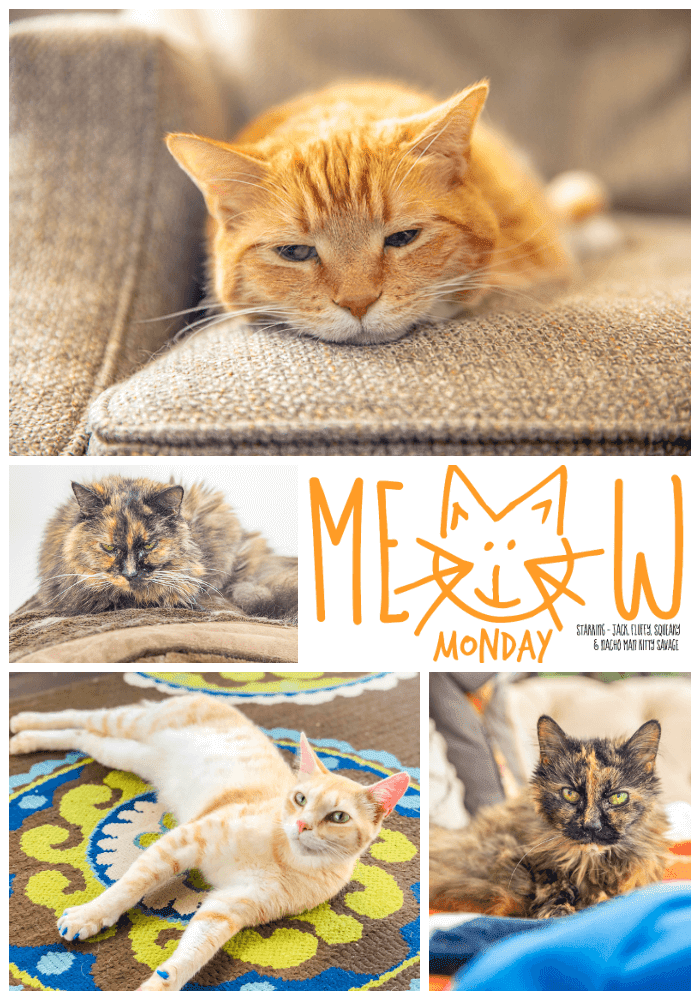 Get your Meow Monday merchandise: 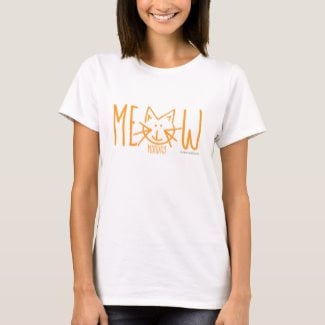 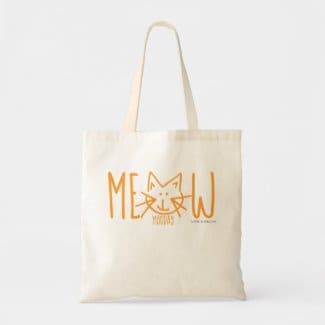 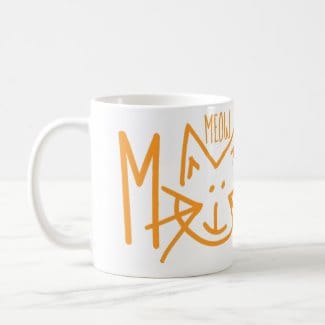 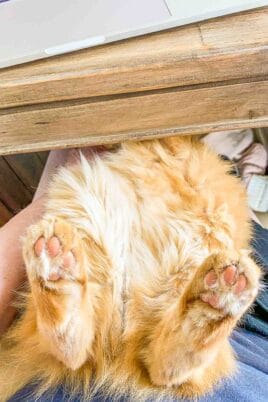 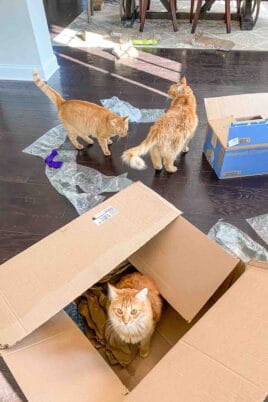 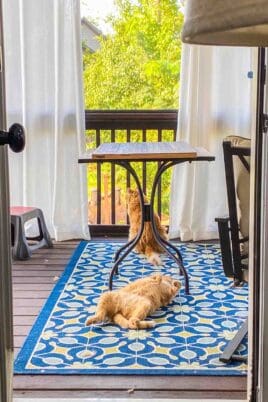 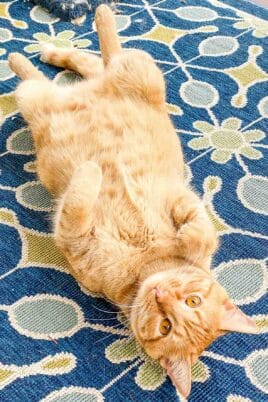