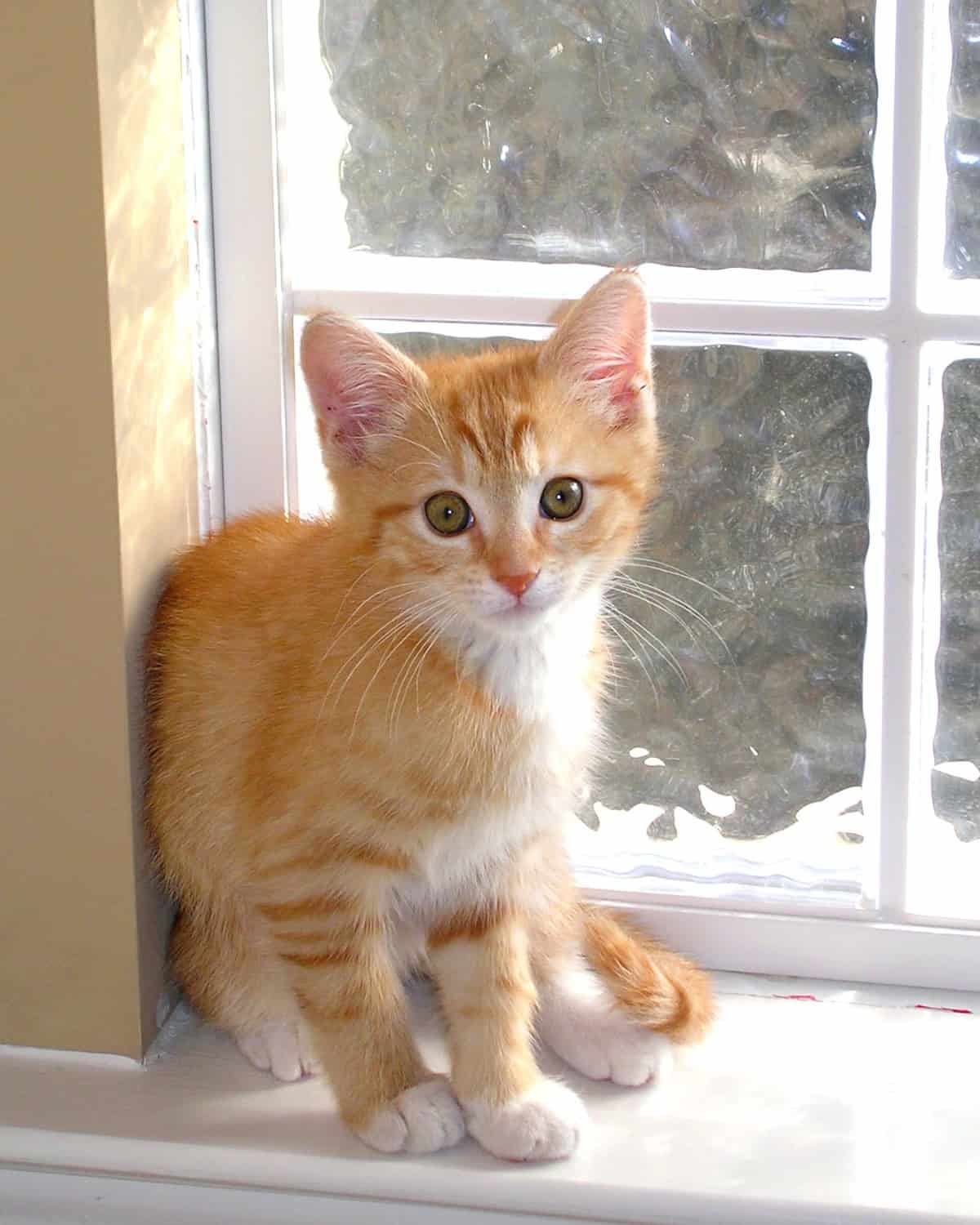 Today, in addition to the cat pictures, I am going to tell you a little bit about how we adopted them!
Jack

We adopted Jack on November 30, 2003, from a pet store at the mall. People would bring their kittens to the pet store to be adopted. We would go to the mall on Saturday’s or Sunday’s, and we always walked past the pet store. They had the same litter of kittens at the store for a few weeks. One Sunday we walked past the pet store and only one orange kitten was in the cage. Chicken Legs said if that kitten is there when we left, he was taking it home. Well, guess what? The kitten was still there and we adopted him. Our lives have never been the same! 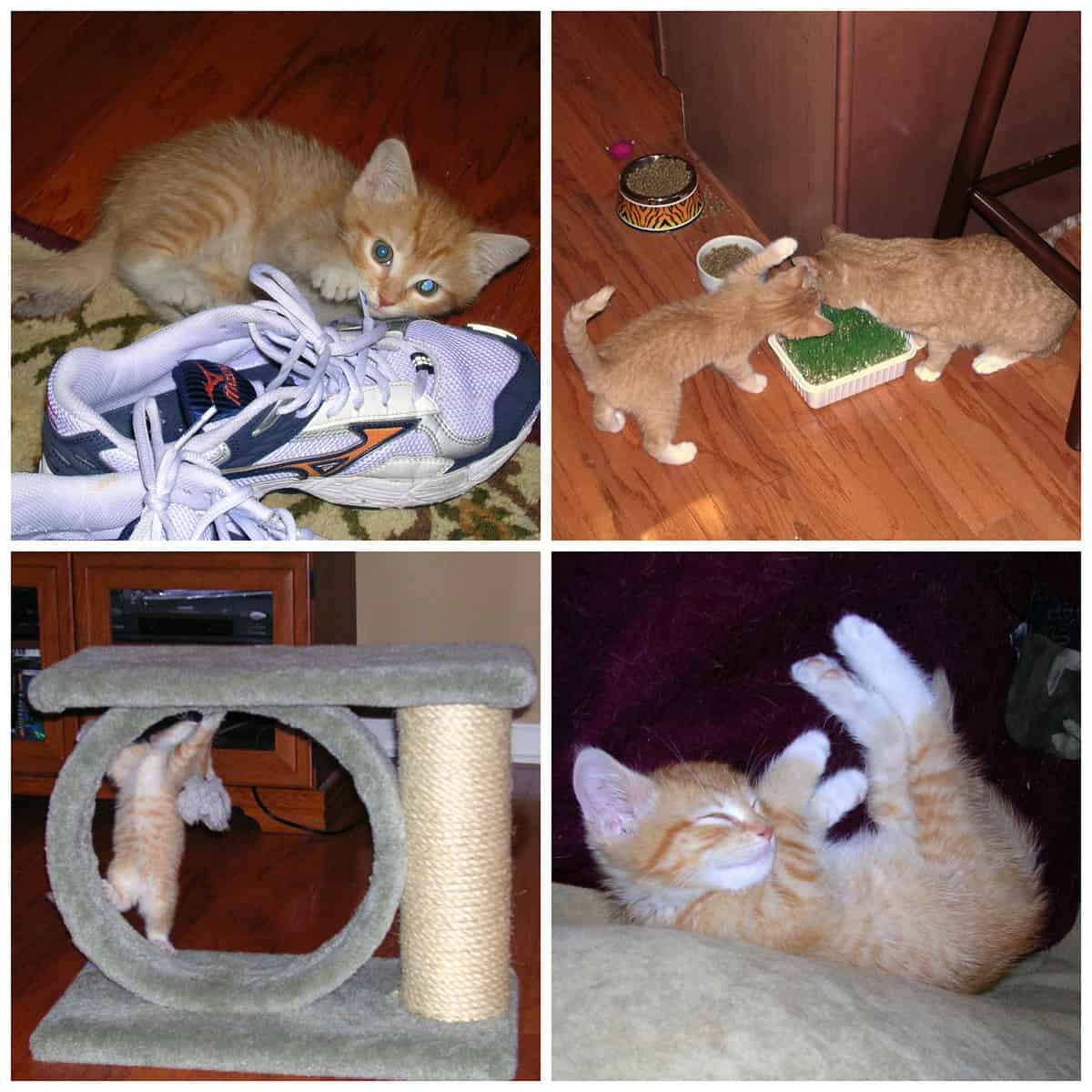 Jack made himself at home instantly. He thought everything in the house was his.
He didn’t like to share. Cat grass – mine! Cat tower – mine!
He played hard and slept hard. We loved to watch him. He was just so darn cute! The other cats didn’t think so, but we did.
When he was a kitten, I would hold him on my shoulder and carry him around the house all day. He was just so cute; I couldn’t put him down. When I would pick him up from the vet’s office, the receptionist would have him on her shoulder. I was worried that he would never know how to walk. 🙂
He still loves to be held. He has to have at least one hug per day. He wraps his arms around my neck. It never gets old.
Fluffy 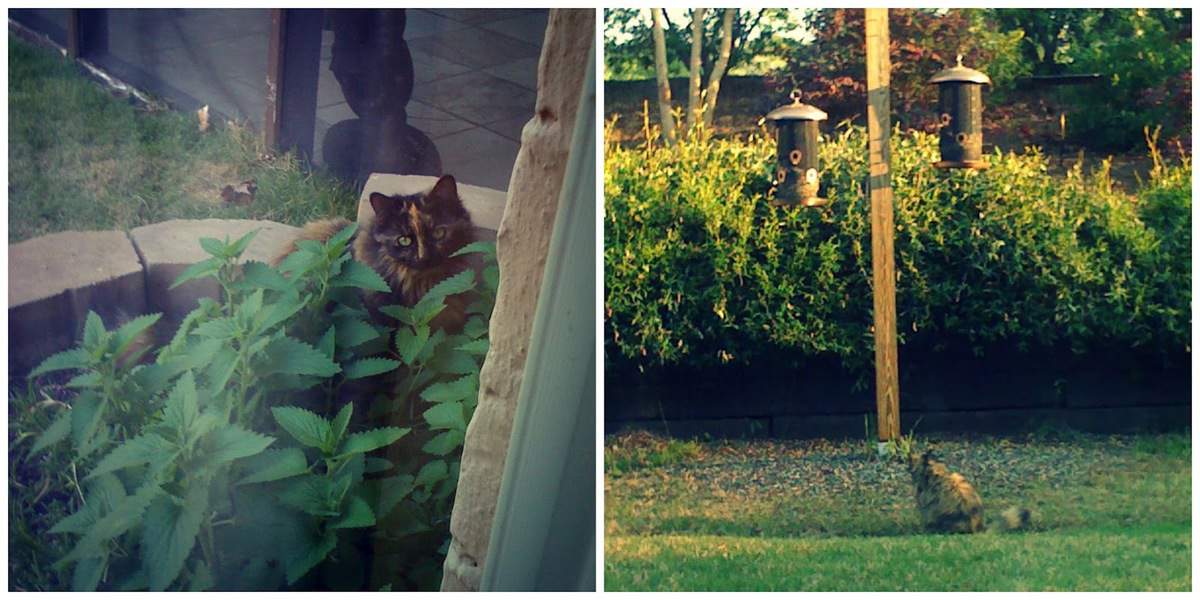 Fluffy actually adopted us. She was a stray.
Fluffy started showing up in our back yard in 2008. She would sit in the yard and watch the birds at the bird feeder and then sit in the catnip we had planted outside. When it got dark, she would leave. We just assumed she was going home. 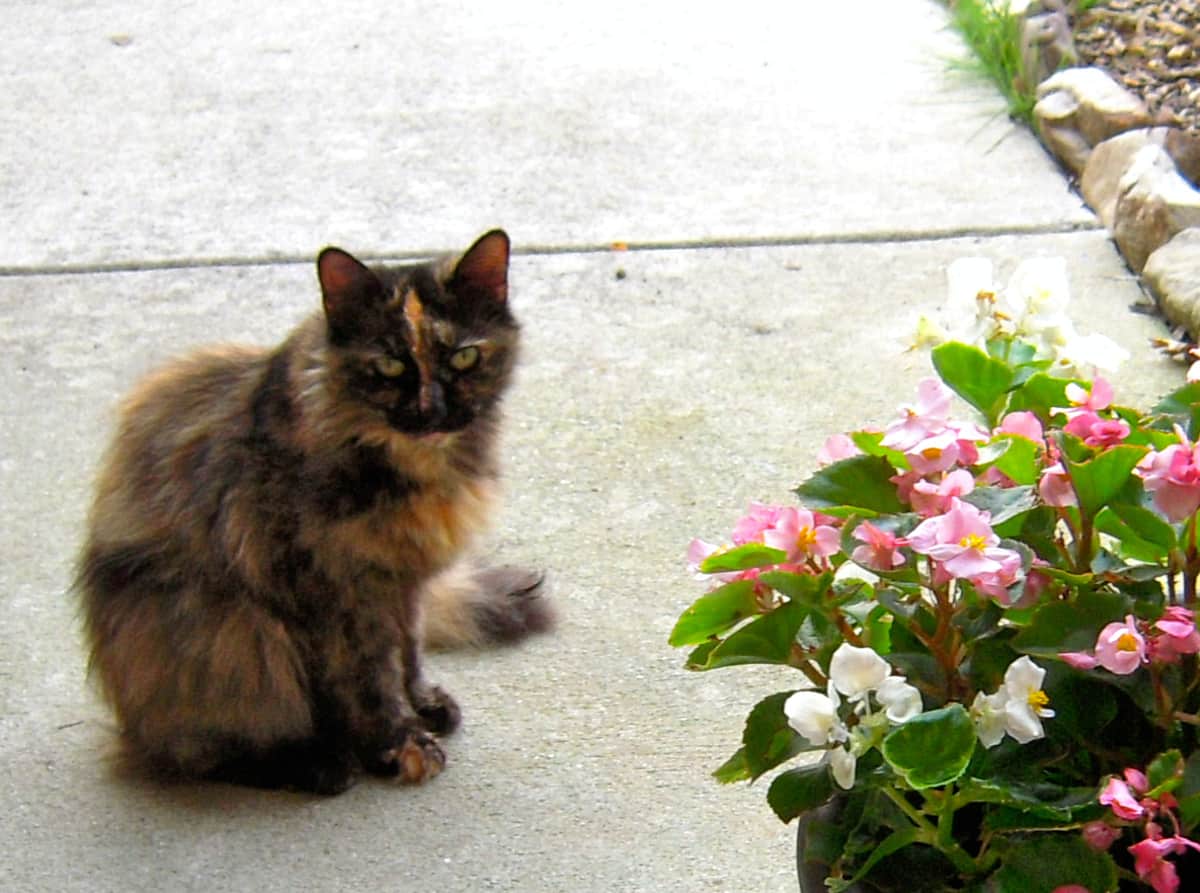 Fast forward several months, she was sitting outside our front door looking inside. She was really skinny, and I realized that she didn’t have a home. My heart broke. I got a bowl of food and put it out for her. Chicken Legs was out of town at the time. I called him and told him that Fluffy didn’t have a home. He said to give her some food. I told him that I already did. We are suckers. If you know anything about cats, you know that we adopted her right then.
Fluffy stayed outside for a few years. We had an old cat, Marmalade, and she couldn’t take another cat inside the house. Jack was already too much for her. 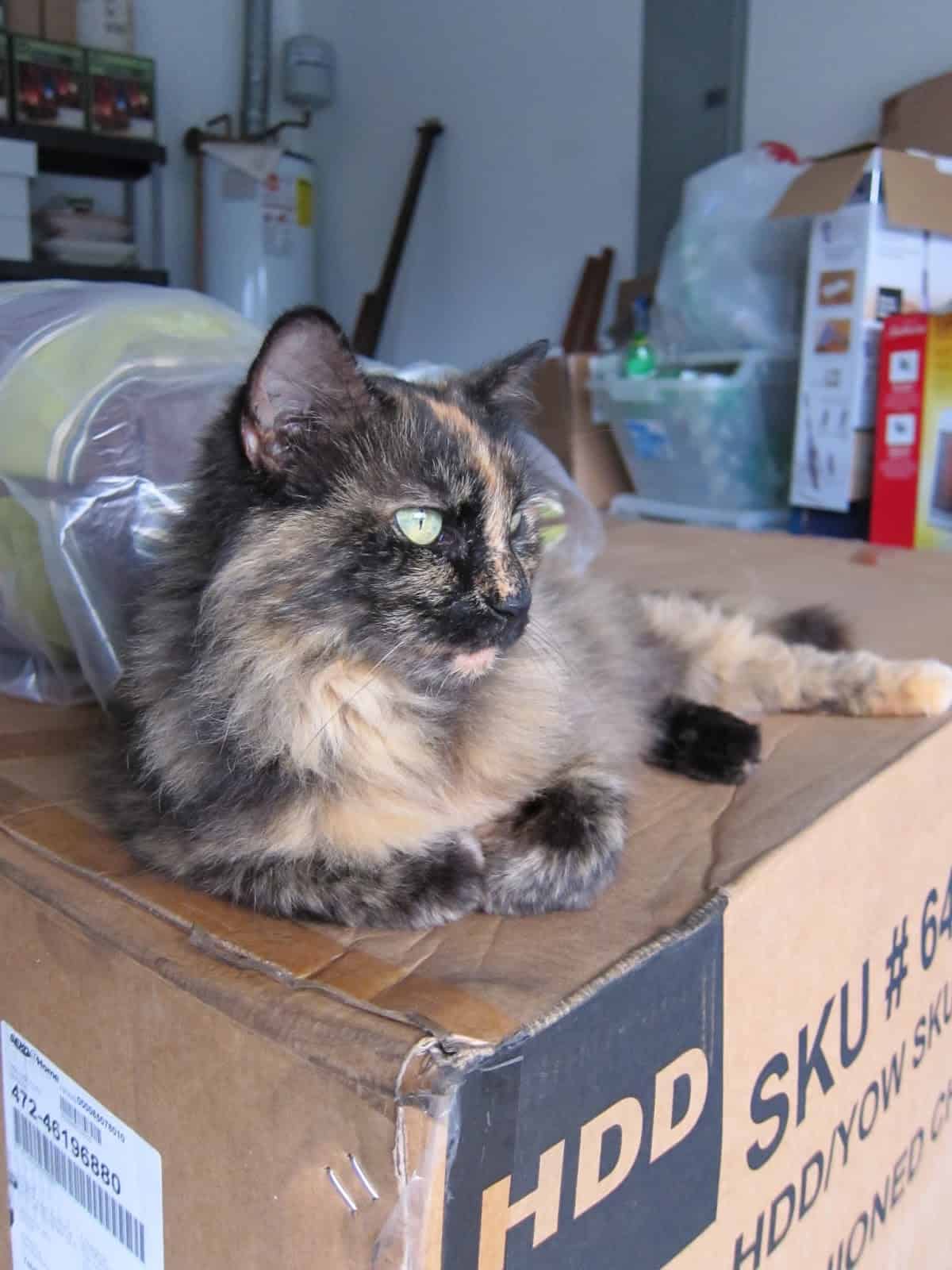 Fluffy had a great setup in the garage. A bed and a heater for the cold weather. We would shut the door at night and let her out in the mornings. She loved to hang out in the garage and watch the neighborhood happenings.
After Marmalade passed away, we took Fluffy to the vet to get checked out. She got a clean bill of health (not even any fleas), and we brought her inside.
She was mad at me for a little while for taking her to the vet, but she eventually got over it and made herself at home.
Squeaky 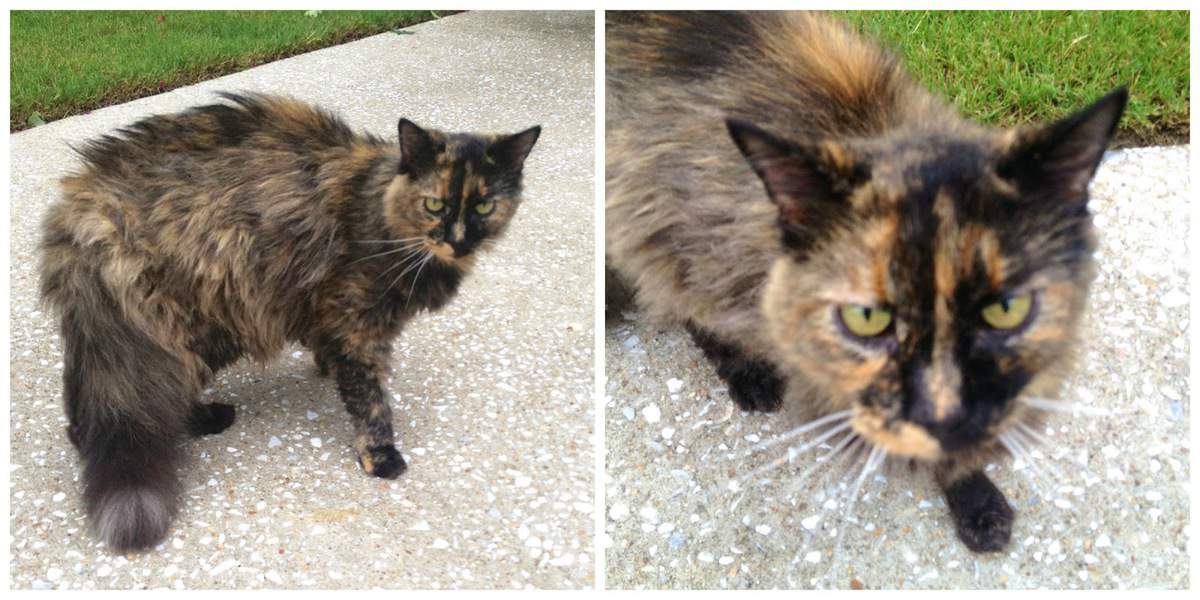 I shared Squeaky’s story a few weeks ago, but in case you missed it, here it is again.
Squeaky was a stray that found us on July 4, 2013. I was outside taking a picture of dinner, and I heard a squeaking sound. I looked up and saw a cat. At first, I thought it was Fluffy, but it was a cat I had never seen.
She was in really bad shape. She had matted fur and was starving. She ate 3 cans of food in minutes. She was so sweet. She let me pet her and brush some of the matted fur. 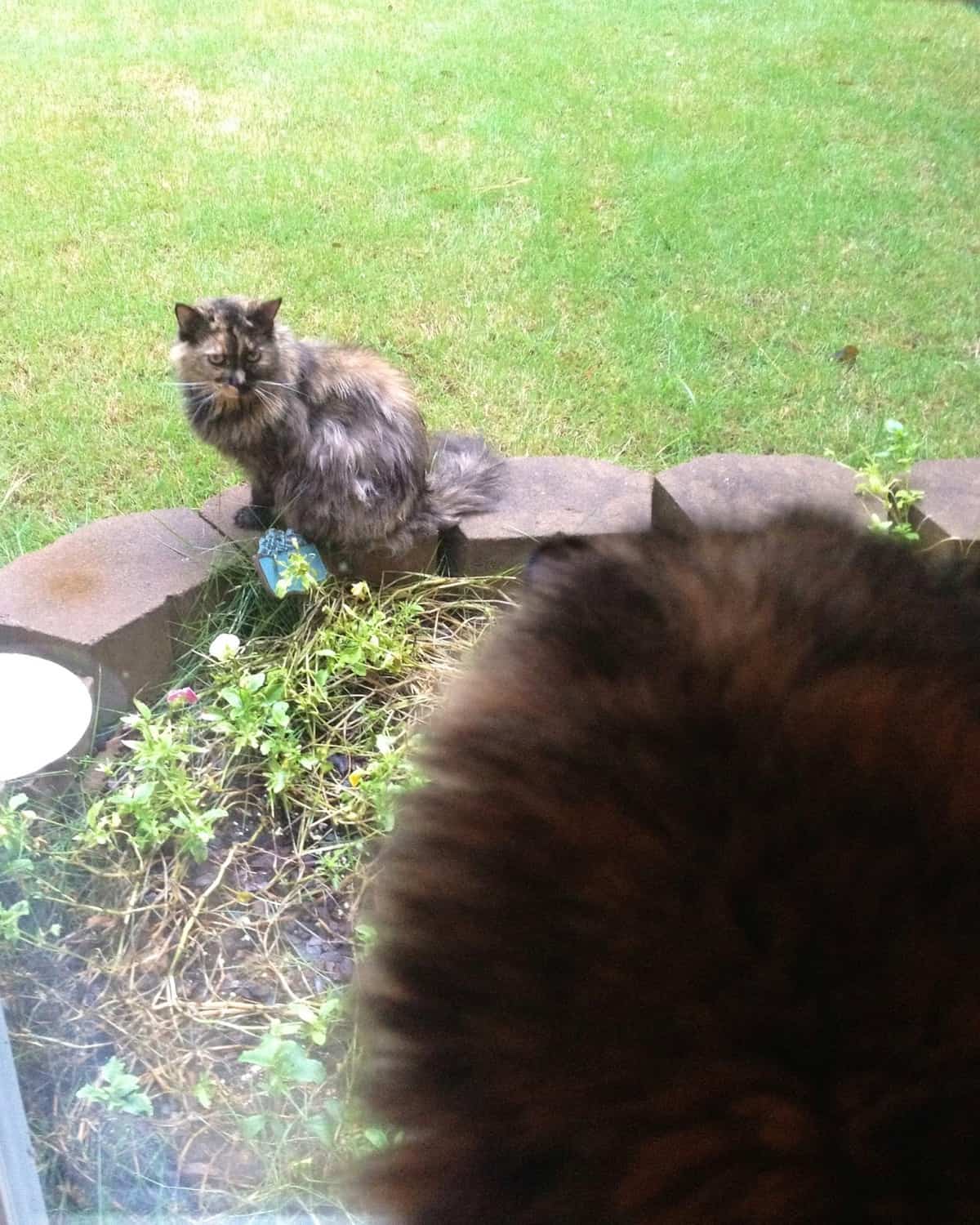 For the last 7 months she has been living outside in the garage. She had a sweet set up. She had a bed, food, water and a personal heater. She loved it, but she really wanted to be inside. She would press her face into the door when I would be in the garage. It broke my heart. 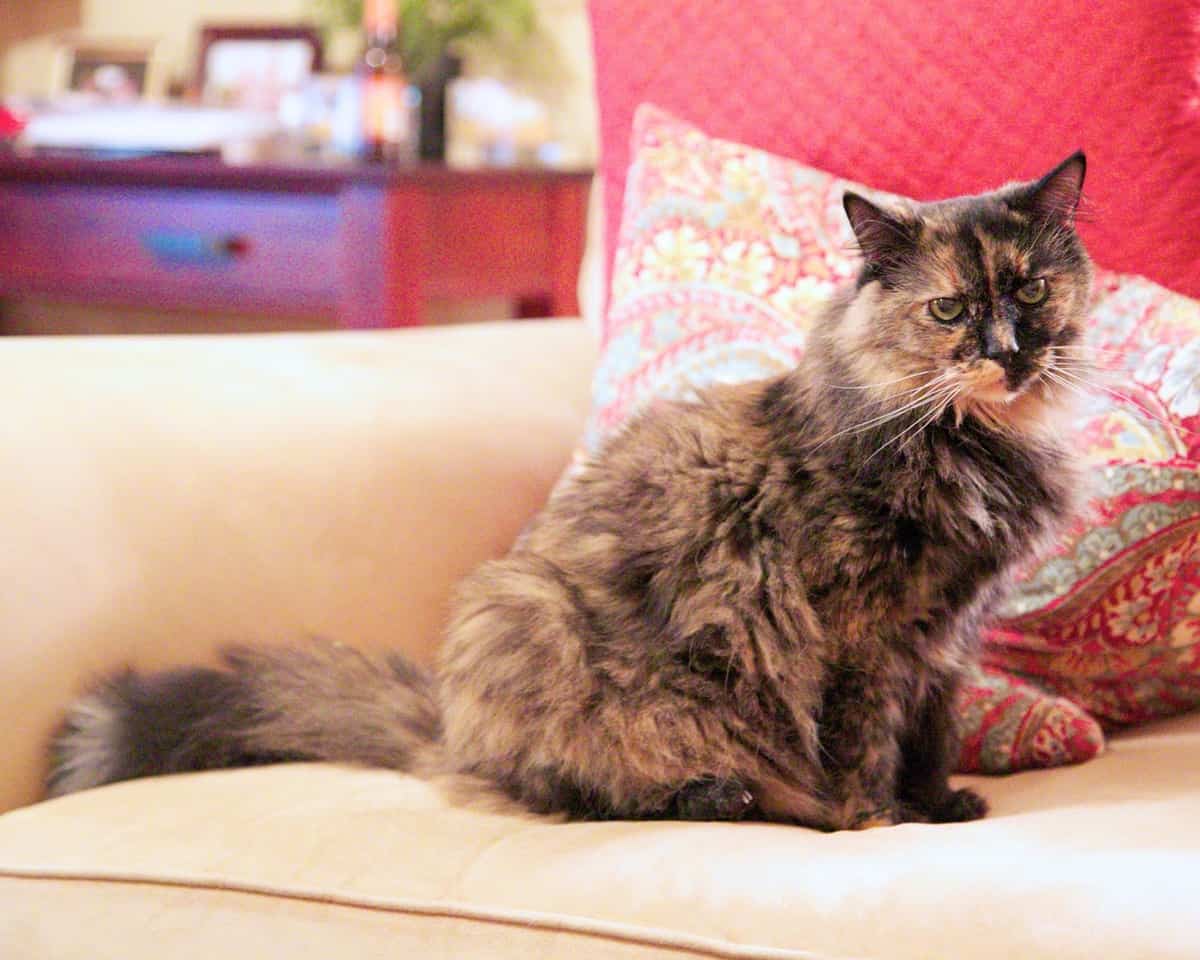 We made the decision to bring her inside after Sherbert passed away.
We took her to the vet. She didn’t care for the vet visit. She bit one of the technicians. Oops!
After getting poked and prodded, she got a clean bill of health.
She got her wish – she got to come inside!
She is adjusting well to being inside. She is really sweet and a little feisty.
She thinks she is the boss of the house. Jack disagrees!
It worked out nicely that she matches Fluffy. They could be sisters!
You can tell them apart by their mustache – Fluffy is all black and Squeaky is half orange and half black.

We love our cats and want to do everything possible to keep them healthy. Keeping them healthy is forefront on our minds with the recent loss of Sherbert. We are especially mindful about what we feed them. We feel good about making the switch to SHEBA® wet food. All of SHEBA® recipes are formulated without corn, wheat, soy, or gluten, and never have artificial flavors or preservatives. None of the other big mainstream wet cat food brands can say that!

We love that all SHEBA® Entrées are made from carefully selected, high-quality ingredients for an irresistible taste. In fact, they have a money back guarantee if your cat doesn’t like it. That is a great guarantee for our picky cats! SHEBA® Entrées for Cats features three delicious lines, Cuts in Gravy, Pates, and GRAVY DESIRES™ Entrees. This week they are loving the Pate food. I have some of each type so when the cats change their mind on their favorite food, I am ready!
This program is sponsored by SHEBA® Brand and BlogHer, I was compensated for my writing but all opinions are my own. 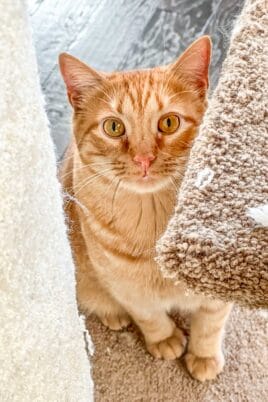 Cat Photos to Make You Happy Good Morning! Happy Meow Monday! I’m here to brighten your day with some photos… 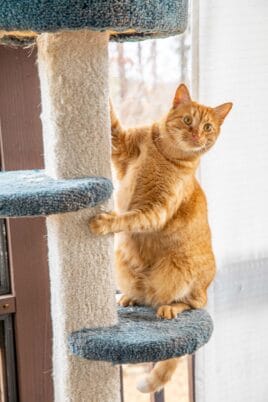 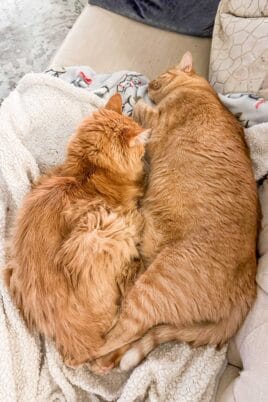